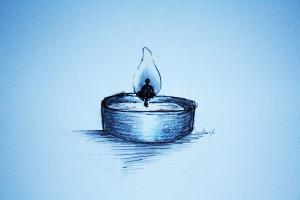 A few years ago I discovered this gem of a site “Illustration Friday”. It’s perfect for us creative cats who need a bit of motivation or fun. Because I’m absent-minded and a procrastinator, I have posted a total of maybe 3 illustrations. That’s about 1 per year! Yeah…

So, this week’s topic is “fuel”. There were many thoughts that swarmed around in my head and a few drawings were made, but I just couldn’t feel them. And then I got it.

Backstory: On October 19, 2011 the Dalai Lama lead a day long prayer and global fast in honor of the people of Tibet who have self-immolated, were killed, or are jailed for fighting for human rights. This day of solidarity was something that I wanted to participate in and while I’m not religious and have few true beliefs, one strong one is that I believe that our minds are incredibly powerful and even sending out positive thoughts/energy can have an effect. Although I’m terrible at being calm and clear headed, I chose to fast and (try to) meditate in support.

I sometimes use candles to help me focus on something and nothing while meditating. I used a tea light and as I was drawn into the flame, I experienced some slight visual disturbance – enough to give me an image. The base of the flame looked like the silhouette of a person sitting in a typical meditative position. Of course it looked like it was surrounded – or on – fire. That made me think of those that self-immolated. I continued on, but the image didn’t leave my head.

I chose to illustrate that image for “Fuel”. To me, it goes beyond thinking of fuel as an accelerant. The fuel is many things: oppression, hate, desire for change, self-sacrifice, a statement. Thinking of the ancient elements: earth, water, fire, and wind, fire was the only one that could produce a chemical change. Anything could be something else.

How are you this evening?

Thankfully my illness opened my head up a bit and allowed a few ideas through. I’m excited to start working on them tomorrow. Whilst in bed and unable to move, I was stuck with the t.v. I found a show called…well, something about art. It had “art” in the title. I watched 2 episodes (they were about an hour long) and although I missed most of the second episode (sleep attacked me), I was pleased with what I saw of the first. It’s about an art competition; 10 (or so) artists compete for their own show at the Brooklyn Art Museum. The first contestant to get canned was Ugo; a beautiful Frenchman whose style is similar to that of Keith Haring. Initially his piece was unimpressive and boring…lots of red layers. But then he removed the red backdrop and WOW. It seemed like it came alive. It was unfortunate he didn’t remove the red backdrop from the get-go – undoubtedly that would have saved him.

Don Vito the “Pig” is running laps around his cage and it’s loud, so I’m retiring for the night. Since I haven’t posted to this, I will leave you with a picture I drew while working as a TSR. No thought involved (obviously) – simply sitting in front of a computer, listening to people threaten to end my life because they have no internet connection. Sometimes I actually miss that job, but I think it’s because I was good at it and there are very few things I’m good at. 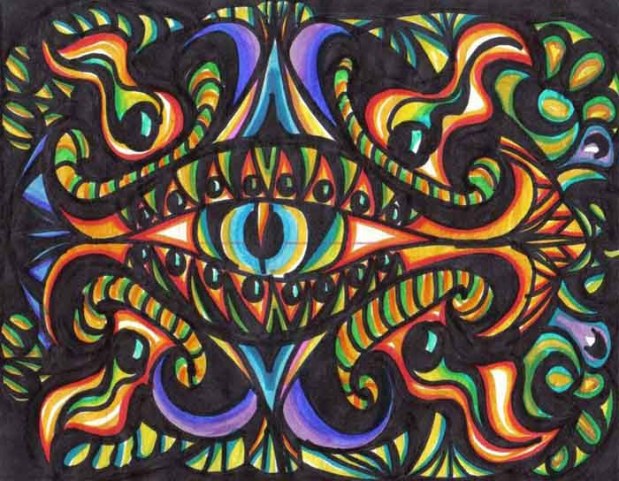 Those that know me have often been subjected to very long emails nearing novelette lengths. And they’re just emails. They’re filled with possible ramblings or just several paragraphs of intense thought. But still…they’re emails. They should be short and to the point.

I’ve been working on that, so now my emails usually are short and to the point, but I really have to fight off rambling and giving every detail of every thing I’m attempting to communicate. I think partly it’s because of my fear of being misunderstood. This carries on into my blogs.

When I create a post that involves a drawing, it’s much easier for me to just quickly jot down a few thoughts about the image and leave it at that. I certainly have an urge to go in depth and tell you every thought I have about not only the resulting image, but also my feelings on it while creating it and so on. What happens is I end up with a very, very long post that not many people will want to read. Plus, when I write like that it seems I get burned out. So much so that I won’t post for a very long time after. Obviously, that happens now without the burnout, but I’m working on that too!

I feel internally divided – where one part wants to share a lot with the world and be very open about everything (I think letting people know they’re not alone while still acknowledging their unique circumstances is important) and the other part wants to remain closed off, severely private and almost cold, I suppose. It’s a constant battle and whoever the victor is depends on my mood that day or moment.

The reason I’m thinking about these things tonight and writing about it is because I want to try to find a middle ground or at least a comfortable place with my posting (and myself). Presenting those pieces as I do was a big deal for me because there is a lot (a LOT) of resistance from my family and some friends about the type of work I do and it’s always been a struggle trying to feel good about myself and please them at the same time. My family likes what I do as long as it’s not what “I” do, if that makes sense. I don’t think I would ever be able to show them the works that I post here and the amazing thing is that these pieces have been very well received by others – I didn’t think that was possible. The voices of my family rotate through my head when I make those sometimes, so to hear/read positive messages/critiques about them floors me.

I know that when some people meet me and then see my artwork, their initial impression of me goes through a pretty large overhaul. I could say that I’m not a violent person; I’m actually very peaceful, but that’s not entirely true. It goes back to that division I mentioned earlier – part of me is violent and angry and the other part is incredibly peaceful and loving. That’s not to say that the work is violent though. I don’t think it is. I think the last two images I posted are actually very loving and represent an ultimate of something…maybe self-sacrifice? There are so many themes that could be applied and, if it were up to me, “violent” would be at the end of the list.

I like to keep this blog not too personal, but not so distant either. I hope I’m achieving that. I’m pretty sure I rambled…

That’s a possible title: “Kindness…” I finished this last night and I’m not sure how I feel about it. While I was still in the sketching phase, I couldn’t decide if I wanted to make the male subject’s face similar to the previous pieces or if I wanted him to have a peaceful appearance. I went with peaceful and while inking it, I felt as though I had made a mistake. Now I’m not so sure that I did… I think it might work. 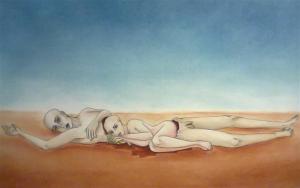 I am a slacker! Procrastinator, excuse-maker, etc… I was hoping it hadn’t been more than a couple of weeks since I updated with fresh work/posts, but it has. WAY more. I’m ashamed.

I haven’t really been accomplishing much as far as quantity. I have, however, finished a drawing that I attempted 3 times before. I suppose 4th time’s the charm. As usual there are several potential titles flying through my head, but at least this time there is a theme: “Dinner”.

My goal with this one was to get our female’s face and hands to emotionally match. I think I’ve achieved it. When I asked J.D. what his thoughts were, he said “Love” and I was happy.

I’m still having some problems with background. I really like using chalk pastels for backgrounds. I like the effect it offers the picture and overall feel. I’m just not always confident in my choice of colors. This one, though…it might be okay. 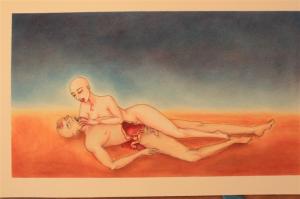 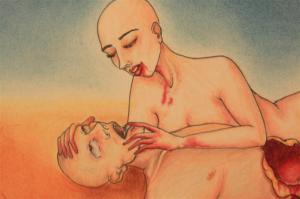